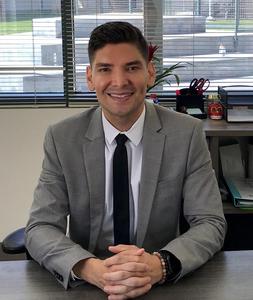 Juan Flores is a former El Monte City School District student who has worked for the District throughout his career in education.

Not only is Flores a former El Monte City School District student, but he has worked at the District for his entire career in education. Flores started as substitute teacher in 2008. He taught grades three through six and eight, as well as served as a teaching assistant principal and summer school program. He has helped to lead the Leader In Me program, contributing to Shirpser School’s success in obtaining Lighthouse school status.

He earned his Bachelor of Arts in urban learning and a Master of Arts in educational foundation, both from Cal State Los Angeles. He earned an administrative credential from Cal Poly Pomona.

“Besides learning as much as I can, I intend to help realize the vision the school community has been working on, which includes cementing our status as a California Distinguished School,” he said.